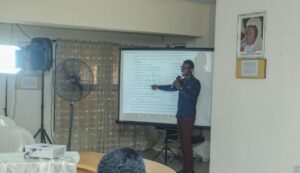 One of Segun Solomon’s fondest memories growing up in Osun State, Nigeria, was of the day he received his junior-high scholarship.

“I remember opening the letter and being overjoyed,” Segun says. “I couldn’t wait to get home and tell my mum.”

Segun, now a teacher at Phoebestar Royalty Schools, director of Penguin Tutors and Educational Services, and team lead at the Helping Lives Network, is teaching his peers about the importance of independent reporting and of the role young leaders can, and should, play in advocating for freedom of the press.

“My advice to other young leaders organizing in-person or virtual sessions is to plan early and be prepared for setbacks,” Segun says, reflecting on the technical difficulties he faced on the day of his session, among them a power outage.

“It’s important to give your audience an experience that will spur them to act and to act now,” Segun says. “That sense of urgency is vital, as you only have one chance to make an impact on participants.”

Segun found over the course of his session and other work with young adults a surprising openness to new perspectives and a willingness to entertain new ideas in a spirit of collaboration.

“The young adults I work with are willing to take risks, to search for new ideas, and to seek out new possibilities,” Segun says.

In his view, it’s an open exchange of ideas that makes for a thriving community, one where community members are informed about and engaged in the world around them.

“That’s how I’d like to be remembered,” Segun says. “As someone who didn’t accept impossibility.”

As a leader in his own right, Segun makes a concerted effort to lift up his team members, highlighting their work and listening to their concerns.

“An inspiring leader appreciates his team, cheers up the depressed, and gives everyone the freedom to do their best work.”

Interested in Segun’s work? Learn how you can stop, reflect, and verify on our YALIChecks page.