Country of the Week: Kenya
By tjohnson
7 MINUTE READ

A climate change campaign that “breaks the rules” by bringing the discussion to the people through song, dance, and graffiti. A community mapping project that protects residents by empowering them to solve problems and advocate for themselves. A youth mentorship program that teaches high school students to be servant leaders.

What do these initiatives have in common? They were all started by YALI Network members.

Welcome to the first installment of the YALI Country of the Week! Each week, we will showcase one country and some of its outstanding YALI Network members.

This week’s Country of the Week is Kenya, and each one of these impressive initiatives was launched by a Kenyan Network member. Read on to learn how the YALI Network

helped them change their communities for the better 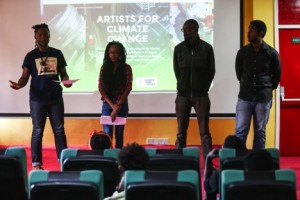 enedict Muyale calls climate change “the greatest challenge both the poor and the rich face” in the twenty-first century. He sees its effects in Nairobi, witnessing “intense rainfall, flash floods,” and “businesses or kiosks swept away.” But climate change can be difficult, or even boring, to bring up in conversation. “How do we make it interesting?” he wonders. With the help of the YALI Network, Benedict has found a way: art.

Through his organization, Green Sun Cities, Benedict launched a Climate Art campaign that “brings the discussion to the people” through poetry, dance, rap, song, and even graffiti.

After receiving 50 applications from local artists who understood the need to address climate change, Benedict used the YALI Network Online Course Understanding Climate Change to train 18 of them to take climate change to the streets at an event in Kariobangi.

“We received overwhelming messages from over 300 locals who attended the event,” Benedict says. “To make sure this awareness stayed at the heart of the community, we painted a graffiti mural on the walls… This awareness is the starting point for taking responsibility to avoid destroying our planet and stealing the future of our children,” he says.

“With such demand for more Climate Art events, we now have a vision to take this discussion to other urban slums in Nairobi, together with the artists.”

“Knowledge is power,” says Stephen Githaiga, also of Nairobi. After taking the Community Organizing for Action course, Stephen realized he could bring that power to the people of rural Nyatike.

Stephen used community mapping, which he calls “a process carried out by the community for the community,” to help Nyatike residents identify problems they were facing related to local mining activities and find solutions to address them.

Stephen began by identifying key community members “who would act as champions on mining issues and also represent the whole community.” Then, he worked with these leaders to gather information “on the state of small-scale miners in the area, resources available, their engagement levels with the government, and challenges they encountered.” Through community discussion and feedback, Stephen empowered residents to come up with solutions and rally together in “associations or groups for action.”

The meetings Stephen facilitated were inclusive of “women, men, local administration, clergy, and youth in proportionate measure.” One participant stated, “As a community, we are forever grateful for this knowledge and to other community members so that the whole community benefits. I believe that in a mat

ter of time, our lives will change for the best.”

“Thank you, YALI Network,” Stephen says, “for enabling me to impact my community.”

The Servant Leadership: The Deciding Difference course “reshaped my thinking and drove me into action,” says Protus Musotsi, of Eldoret. He decided to use his new skills to improve society by launching a Youth for Servant Leadership initiative, training and mentoring local high school students to be better leaders.

“The program has been greatly appreciated by school teachers and students,” says Protus, a fact that has allowed him to broaden the program’s reach and include more young leaders. He has also used materials provided by the YALI Network to train these and other youth on environmental conservation and climate change, carrying out tree planting and solid waste management in their communities.

“I am who I am today because of YALI” and will be a member “for life,” he says.