“When girls have a chance to learn, they raise healthier families, earn higher salaries, they contribute more to their nation’s economy.”

“Every girl matters, and when she is given the opportunity to get an education, everyone in her life benefits.”

U.S. first lady Michelle Obama and the Peace Corps have joined to help girls around the world “get the education they deserve.”

Globally, 62 million girls are not in school. Millions more are fighting to stay there. They often face harassment, discrimination, threats and violence just to get an education. And even when girls reach school, they may not have adequate materials to help them learn to read, write and do basic math.

“That just doesn’t limit their prospects, leaving them more vulnerable to poverty, violence and disease, it limits the prospects of their families and their countries,” Obama said in announcing the White House–Peace Corps “Let Girls Learn” collaboration March 3. 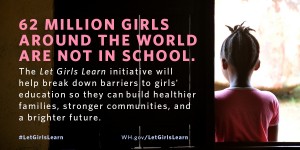 According to the White House, girls’ attendance in secondary school is linked to later marriage, later childbearing, lower maternal and infant mortality rates, lower birthrates and lower rates of HIV/AIDS. The World Bank reports that every year of secondary school education increases a girl’s future earning power by 18 percent.

“When girls have a chance to learn, they raise healthier families, earn higher salaries, they contribute more to their nation’s economy,” the first lady said.

Let Girls Learn will empower local leaders to put lasting solutions in place. Peace Corps volunteers who live and work at the grass-roots level will serve as catalysts of community-led change.

From helping to start a school library to organizing a technology camp for girls, this collaboration will bring increased focus and resources to the issue of girls’ education. 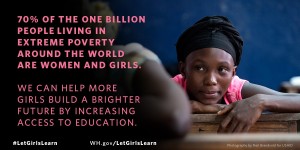 The new collaboration extends the existing Let Girls Learn initiative launched by the U.S. Agency for International Development in 2014. USAID focuses on ensuring that girls and boys can safely enroll and learn in schools and that all children leave school with the skills they will need to thrive. USAID works to improve teaching techniques and learning materials; support regular assessments of reading skills; maximize classroom instruction time spent on basic skills, especially reading; support instruction in native languages; and promote parent and community involvement in education.

As USAID Chief Strategy Officer Carla Koppell says, “Because an educated girl is a force for change, she is the leader and peacemaker of tomorrow.”

A video of Michelle Obama speaking about Let Girls Learn is available on YouTube.