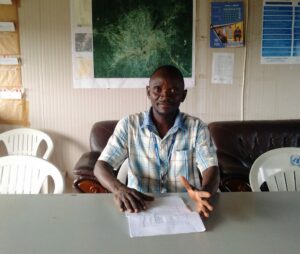 In 2018, the Democratic Republic of the Congo lost the second-largest rainforest area of any country, according to Global Forest Watch.

Deforestation across the Congo Basin has only climbed since, putting at risk local climates as well as access to natural resources.

Alexandre Shabani, who grew up in Kindu in Maniema province, took an early interest in these emerging trends and decided in 2019 to facilitate his own YALILearns session on the issue.

“We need to work hard and be self-reliant to overcome our situation,” Alexandre says. “With rising hunger rates, we need now more than ever to cultivate our land.”

Alexandre, one of 10 children, was always eager to lead the pack, taking oversight roles throughout primary and secondary school.

“I was always the leader, the chair of the class, the person who wasn’t afraid to speak in front of large groups of people,” Alexandre added.

That interest in public speaking served Alexandre in his YALILearns session, allowing him to address the state’s deforestation crisis and the scale of the damage.

Among the topics covered in Alexandre’s session were the livelihoods of the 80 million people who depend on the Congo Basin, the adverse weather effects caused by deforestation and the role young adults can play in stemming the tide.

Reflecting on his own session, Alexandre advises other young leaders to include a diversity of voices at their YALILearns session.

“I invited young men and women as well as specialists from the agricultural sector,” Alexandre says, adding that the varied perspectives inspired new insights.

“My favorite part of the session was the discussion and hearing participants’ feedback,” Alexandre says. “The conversations indicated to me that the course was an important one and that participants were excited to change their communities.”

For his session, Alexandre chose to focus on the YALI Network Online Course “Agripreneurship: A Path to the Future” (also available in French), which explores the intricacies of the agricultural value chain and the role young leaders can play in the agribusiness sector.

Alexandre tailored his session further by zeroing in on the links between deforestation and agriculture and the opportunities lost when land is destroyed.

In this, Alexandre explains, focusing on participant agency and the role of each individual in changing his or her community was instrumental.

Interested in Alexandre’s work? Find out how you can facilitate your own session on our YALILearns page.