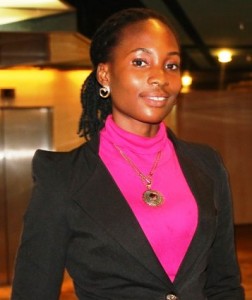 Nigerian entrepreneur Cynthia proved that there is financial and environmental value in cassava peels.

A finalist in the 2014 Global Innovation through Science and Technology competition and a YALI Network member, Cynthia developed a way to convert cassava peels into nutritious goat feed. Farmers had perceived the peels as a useless byproduct and burned them as a cheap way of disposal. But that practice releases harmful pollutants into the atmosphere.

Nigeria is the world’s largest producer of cassava, each year growing 40 metric tons and generating 12 million metric tons of peels. When burned, those peels release more than 10 million tons of toxic carbon monoxide in the air.

Cynthia’s solution to the problem begins with a simple platform on which peels are dried. The dried peels are packaged and sold as a healthy goat feed. By selling both food products derived from the cassava tuber and animal feed, farmers can utilize 100 percent of their plants and boost their incomes. “This is something the community embraces with joy and excitement,” Cynthia says.

In 2013, Cynthia, 24, founded the social enterprise Kadosh Production Company in Delta state to recycle cassava waste. The venture also helps small-scale farmers get credit so they can purchase drying platforms, and it links cassava growers and processors with goat-farmer customers. With an eye set on expansion to other countries, Cynthia says she hopes her business will grow to be “a major influence in the Nigerian economy and Africa at large.”

Cynthia has a bachelor’s degree in textile science and polymer technology and a master’s in business administration from Ahmadu Bello University in Zaria, Nigeria. She says that since she was young, her parents have inspired her to go into business.

Further inspiration came later when Cynthia volunteered to work for a year at a woman-owned bakery “to learn how to run a business of my own.” At the bakery she learned about the challenges associated with running a business and how to handle those challenges. The experience “made me confident that I could run my own business,” she says.

Cynthia received further business advice from a U.S. mentor — a former United Parcel Service executive. Gary Mastro is one of many experienced businesspeople MicroMentor has matched with young entrepreneurs around the world. MicroMentor is an initiative of the nonprofit humanitarian group Mercy Corps based in Oregon. More than half of the entrepreneurs who request its help are from outside the United States, the group notes.

Cynthia’s first venture was a liquid soap company called EverGlow that makes an affordable, hygienic alternative to bar soap. “Gary is a pillar in my business and a man I respect so much,” she says.

And now Cynthia is a mentor herself. In 2013 she founded Confident Women to mentor young women and teach them about home management, family relationships and how to make liquid soap so they could start their own small-scale businesses. The businesswoman later changed the name of Confident Women to the CAMY Foundation after collaborating with a partner in Zimbabwe who wanted a similar mentoring model in her country. CAMY Foundation now has more than  450 women members in Nigeria and Zimbabwe.

Cynthia says she communicates regularly with other YALI Network members who tell her about what is happening in other countries and let her “see the great work young leaders like me are doing.”

“This encourages me a lot to keep up the work and never give up so we can have a better future.” She adds that she learns a lot from the ongoing YALIChat Twitter conversation.

Cynthia encourages other YALI Network members and potential members to “maximize the opportunities from YALI Network” and to “be a change in their society.”