Racheal Mpirirwe Kaigo is very familiar with political processes in Uganda. After finishing university, she worked for a women’s organization called Action for Development, whose mission is to empower women in politics. She recalls, “I was placed on a project where we educated women and local leaders on how to debate at the local council.”

During project training, Racheal noticed how apprehensive the women were when advocating for gender issues. She saw firsthand different forms of discrimination that kept women from leadership roles. After observing the blatant efforts of some men to subordinate women, Racheal knew that she needed to teach women political and economic skills to build their confidence and help them speak up about issues pertinent to them.

In addition to her women’s empowerment endeavors, Racheal is equally as passionate about combating violent extremism. “In July 2010, there were terrorist attacks in Uganda where about 80 people died,” she says. At the court hearings for the accused perpetrators, Racheal recalls mothers crying and wondering where their parenting had gone wrong. Racheal wanted to understand what drove these young people to carry out these attacks. Through her research, she identified poverty, bad governance, and false teaching as some of the pernicious factors that predisposed individuals to radicalization. 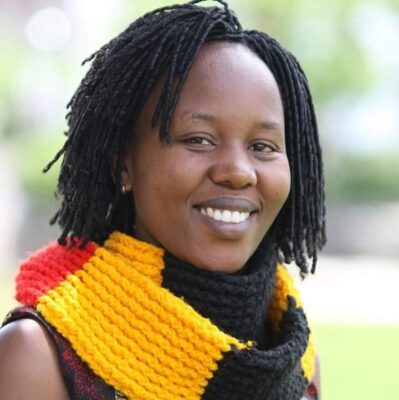 Currently, she works at the Intergovernmental Authority on Development: Centre of Excellence for Preventing and Countering Violent Extremism (ICEPCVE), where she heads the Civil Society and Community Outreach Unit. “This is a unit that is responsible for bringing together civil society actors to work together to prevent violent extremism,” she explains. The group boasts a robust network of youth- and women-focused organizations from different countries that work to end violent extremism. ICEPCVE created a platform for these organizations to share experiences, knowledge, and best practices. Racheal notes that this works well because organizations from different countries can share best practices to prevent violent extremism.

Countering violent extremism takes skill and patience. For Racheal, she notes the primary skill she has learned in her field is being a nonjudgmental listener. She explains that young people join these extremist groups due to societal and environmental factors. “So, as you listen to them, you need not to judge them because you think they should have had another way, but to listen to them and advise them on the right way,” she says. Racheal explains that her work is rewarding, but it comes with caveats. With extremism, you must always be vigilant about with whom you are talking to keep yourself safe.

Despite the challenges Racheal faces in her work, she takes pride in her women’s empowerment efforts. “The best is when you have empowered women in communities and then you see them running for office, and they are winning! For me, that has always been the greatest memory,” she fondly recalls.

Are you interested in learning more about women’s empowerment? Visit our Africa4Her page for more tools and resources.