Political consultant and public relations specialist, Kitty Kurth, joined the YALI Network team to answer your questions about the United States’ elections. This historic presidential election caught the attention of YALI Network members and people across the globe.

Still have questions about the electoral process? Learn more with these snapshots from our special edition #YALICHAT or visit our Facebook page for more election information.

Americans began heading to the polls as early as 46 days before Election Day. Early voting allows Americans to elect their officials without waiting in long lines.

Local officials, party representatives, volunteers and international election observers organize and monitor the election process in the U.S. to ensure the protection of voters. 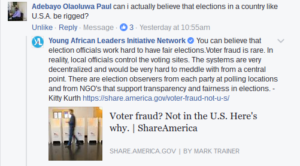 The Electoral College ensures each state is represented based on its population. Population size determines the number of a state’s electoral college votes. 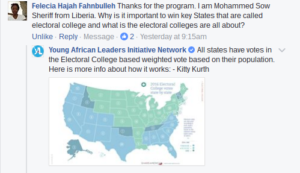 A candidate wins the presidency when he or she earns 270 Electoral College votes.

If neither presidential candidate wins 270 electoral votes, there would not be a “re-run.” The election would go to Congress for a decision. 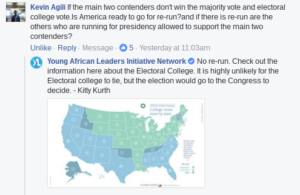 Presidential candidates try to win states with a significant number of electoral votes. These states where the election is close are called swing states.

For more information about how the next president of the United States is chosen, check out “YALI’s guide to the hows and whys of the 2016 U.S. elections.”