For Willard Gomani, the 24-year-old chief of the Ngoni Maseko clan in Malawi, empowering youth to vote in the country’s upcoming general elections came naturally.

“I’ve always liked interacting with people and learning from those different from me,” Willard says.

Raised by his aunt after his mother died in childbirth, Willard recalls making friends easily in his community and delighting most in the festive seasons of Christmas and Easter.

“One year, I was cast as Joseph in our Sunday school’s play,” Willard recounts. “Perhaps because I was easygoing, social, and kind.”

Today, one of Willard’s central concerns is getting the youth in Malawi to feel similarly connected, to see themselves in their country’s future.

“Much of the youth think that their vote won’t make a difference, that it won’t change anything,” Willard explains.

“They tell me: ‘At the end of the day, someone will win and someone will lose; my vote won’t make a big difference.’”

Among the many challenges facing the youth in Malawi today is a lack of adequate information about the electoral process, Willard explains.

“The youth need to know not only that it is important to register, but also when and how to register.”

Informing the youth about various candidates’ platforms and policy priorities is key, too, as Willard notes.

“If they don’t take an interest in the electoral process during this initial stage,” Willard warns, “it becomes more difficult for them to be active participants in their societies.”

And youth involvement needs to extend beyond the current general elections, Willard adds.

“It’s important to get the youth involved every year, not just during an election cycle.”

The 24-year-old chief stresses, too, the value of working within social and communal frameworks to achieve civic aims, namely, reaching out to chiefs and other clan members to ensure that candidate proposals reach community members near and far.

“There’s a saying in Malawi,” Willard explains, “that ‘you don’t enter someone’s house without knocking.’” 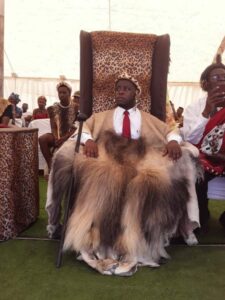 “The same goes,” he says, “for leaders working in civic engagement. If you use the right channels, established channels, your message will reach more people.”

Fears have arisen, even as these and other campaigns have taken shape, that violence will erupt around the country’s general elections. To that, Willard responds optimistically.

“Though interparty violence still exists, we are hopeful, especially with the president and other candidates speaking out against these and other acts of violence.”

In a perfect world, Willard says, “people would be understanding, would believe in each other, trust each other.”

That hope carries over to Willard’s work with Malawian youth.

“We want the country’s youth to take center stage, to understand the change they can make in their communities.”

Interested in Willard’s work? Visit our #YALIVotes page to learn more about elections and how you can make your voice heard.