“Women’s rights are human rights, and they cannot be ignored,” says 2016 Mandela Washington Fellow Desmond Lunga from Botswana. Through his nonprofit organization Men and Boys for Gender Equality (MBGE), Desmond teaches young men how to be allies and empower women.

As a child, Desmond noticed that many of his friends were raised by single mothers. He also experienced growing up in a single-parent home — his mother tragically passed away when he was just 13 years old. Unable to deal with his grief, he shut himself off from the world until his father took him to an orphans and vulnerable children (OVC) camp in Zimbabwe, where he learned techniques to manage his emotions.

Inspired by his father’s unending patience, support, and presence in raising him, Desmond was determined to help others dealing with similar experiences. He founded an OVC organization in Old Naledi, Botswana. Desmond found joy in helping children overcome their obstacles, so he decided to partner with the Mokolodi Nature Reserve, which regularly hosts camps for children and several churches in the area.

Desmond first recognized the impact of gender inequality during his wife’s pregnancy. She faced cultural stereotypes from others that negatively impacted their family. Desmond was told that “women are expected to stay home and be the children’s primary caregivers, while men work.” He acknowledged that these stereotypical beliefs make it difficult for women to join the workforce and discourage men from raising their children. Desmond decided to change the stigma against men actively engaging in child-rearing. In 2013, Desmond founded MBGE to spark conversations about gender inequality, raise awareness of men’s allyship for women’s rights, and discuss the role men play in magnifying women’s voices. Male participation is vital to closing gender gaps, especially ending gender-based violence and creating a safe space for women in the workforce.

MBGE provides a range of counseling, training, and support for expectant fathers. The organization focuses on three programs, each designed to teach men about how they impact their communities. The “One Man Can” program encourages men to contribute to society by becoming positive role models for all community members. The “Men Care” program holds workshops for expectant fathers, helping them participate in their children’s upbringing. Finally, the “Alcohol and Substance Abuse” program provides counseling and rehabilitation for substance abusers and their families to rebuild and integrate them into their communities. MBGE also uses social media platforms to raise awareness of these programs and regularly contributes to national TV programs. 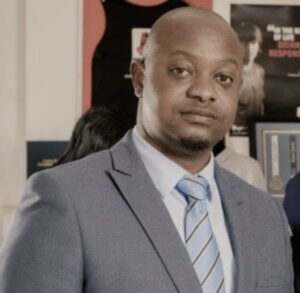 “Meaningful transformation requires the participation of men and boys as part of the solution,” Desmond notes.

However, changing such deep-rooted beliefs comes with difficulties. Desmond constantly faces pushback from more traditional community members on projects that challenge these cultural norms, such as men participating in the delivery room during childbirth or men sharing in household chores. “I have learned to be patient and trust the process and, in doing that, I have nurtured and coached my team with the same belief.”

In the future, Desmond hopes to develop MBGE into a sustainable social enterprise, creating media content about women’s rights and sharing it through TV programming.

Are you interested in learning more about women’s empowerment? Visit our Africa4Her page for more tools and resources.