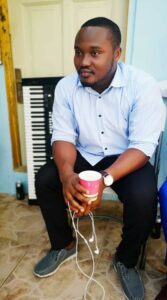 “Those were perfect days,” Koffi says. “We’d gather together with our aunts, uncles, and cousins and just have fun. It was an opportunity to get to know them.”

Among Koffi’s primary concerns growing up was gender inequality and ensuring that his female peers had access to the same opportunities he had.

In April, Koffi decided to organize a YALILearns session on the topic using the YALI Network Online Course Understanding the Rights of Women and Girls, a resource covering women’s rights from a business, social, and communal perspective.

Koffi’s session, which consisted of 17 participants, was a successful one, in his estimation, and brought to light the struggles of young women in his community as well as the role men can play in leveling the playing field.

“Participants were most interested in the ‘Paving the Way for Women Entrepreneurs’ lesson,” Koffi says, referencing the course video on the fundamental role women play in a nation’s financial sector, how gender bias creates obstacles for female entrepreneurs, and strategies to address the multiplicity of gender discrimination.

“I learned over the course of the session that women have not always been given the opportunity to speak out,” Koffi says. “We as men have an important role to play in changing that; men have to take action.”

When Koffi reflects on his early interest in the topic, he returns to his mother, an early model of female strength and tenacity in the face of struggle.

“I have the example of my mother,” Koffi says. “She’s always helping me to be a great man.”

With a topic of interest in mind, the rest comes down to proper planning, Koffi says.

For those looking to organize a session of their own, Koffi recommends personally inviting each attendee to the WhatsApp group or other discussion platform, a strategy, he says, that ensures you are respectful of each participant’s time.

Equally important, Koffi explains, is thanking attendees for their time and contributions as that, he says, enriches the session.

“You know a leader by his actions,” Koffi says. “He makes decisions, he is open to learning from others, and he is a team player.”

Koffi urges all young leaders to focus on the issues that move them and to take the first step to advocate for change. As he sees it, “the development of Africa begins with you.”

Interested in leading your own session? Learn more about the virtual options available to you on our YALILearns page.