Of all of Stephen Selasie Asuo’s memories growing up in Ghana’s Volta Region, his most treasured are the moments he spent playing football with his friends.

“I’d sneak out of the house to play football with my schoolmates all afternoon,” Stephen recalls.

Stephen, now the founder and general manager of YALI TV, is highlighting the stories of response and resilience in his community and across the continent.

“We’re using the power of digital technology to tell the stories and achievements of YALI alumni and young people across Africa to inspire leadership and spur development,” Stephen says.

As Stephen sees it, journalism has the power to transform society, shaping attitudes and behavior alike. 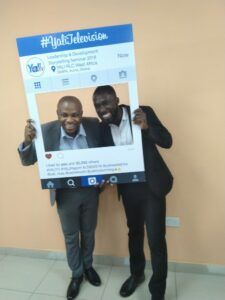 “The media has the power to influence social beliefs,” Stephen says, “which makes it more important than ever for journalists to exercise honesty and courage.”

Media consumers, too, can set the stage for a free and fair press, as Stephen explains.

“Self-regulation is essential, especially with the advent of social media,” Stephen says. “We all need to think critically about the type of information we disseminate.”

The public also plays an advocacy role, in Stephen’s view, with more opportunities in the future to model honesty and integrity in the way they consume and share media.

“In Ghana, it was advocacy groups that pushed for freedom of speech and the independence of the press,” Stephen says, “which paved the way for new media outlets and for increased accountability.”

“I strongly believe that the future of media and journalism in Africa is very bright,” Stephen says. “And it will be social and digital tools that will drive development and economic growth.”

“Currently, young people in Africa are looking for opportunities to improve their skills, to reach their full potential, and to transform their communities.”

For Stephen, it’s more important than ever that young leaders across the continent take advantage of these new and emerging platforms to share reputable stories and to share them wisely. Doing so, as Stephen explains, sets the stage for a more holistic, accurate view of the continent and of the people advocating for change across it.

“There are a great number of young change makers who are leading efforts to transform their communities,” Stephen says. “It’s those stories that are worth showcasing globally.”

Interested in Stephen’s work? Learn how you can stop, reflect, and verify on our YALIChecks page.