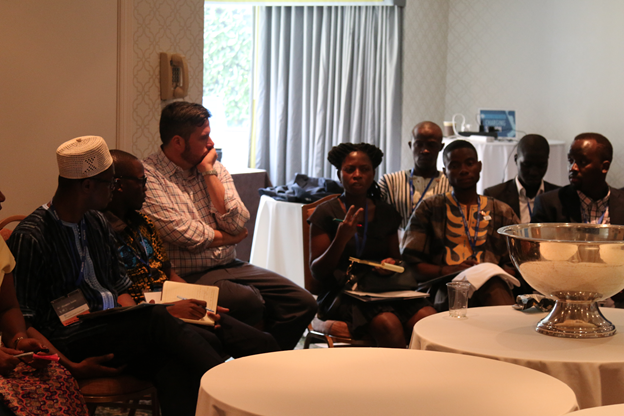 What does it take to succeed in grassroots organizing? Helpful thoughts on this important question were addressed during a special meet-up session at the 2016 Mandela Washington Presidential Summit. Asmaa James, a 2016 Mandela Washington Fellow from Sierra Leone, Macon Phillips, coordinator for the State Department’s Bureau of International Information Programs, and Jesse Boateng, a Senior Grassroots Project Manager at 270 Strategies, came together to facilitate a conversation about the challenges, objectives and results of meaningful grassroots organizing for elections.

Phillips started off the gathering by reminding the group that listening and understanding is more important than influencing and persuading when seeking to mobilize members of a community before an election. He said you first must understand the needs of the people you are trying to reach, and the volunteers who are supporting your efforts, and then provide them with tools to organize in their communities. Another key way to establish solid foundations for a successful campaign is to promote an understanding of what is at stake, rather than solely focusing on motivating people to get behind what you stand for.

For a continent where 70 percent of the population is below the age of 30, the power of building networks across common interests and taking time to understand what target audiences want to address in their communities and then developing content to inform the public about what those issues really mean, is critical.

Boateng warned that young people too often miss the the connection of how votes can ultimately change outcomes in their lives. He said communicating this message by speaking at people is not effective. Instead, having a series of conversations over time can gradually influence and change ideas.

Realizing that you may not be the best messenger for these conversations is an important lesson as well. With the partnership and support of role models, celebrities or cultural figures you can take these important messages from smaller groups to the broader public. A good example of this is Nigeria’s “Vote Not Fight” campaign.

Social media is another powerful tool to make your voices heard and spread the word about important issues, Boateng said. In areas of Africa where governments may not allow free circulation of ideas, campaign leaders should have backup ways to distribute information. “Meet people where they are” is the key motto of grassroots organizing. Once you reach your people in a place where they are comfortable and accessible (online and/or offline), build a political movement around something bigger than the candidate – an idea that proposes solutions.

To conclude the meeting Boateng provided three key pieces of advice. 1) Think carefully about your goals, strategies and tactics and how you can make measurable goals 2) Empower others and approach your campaign with a team model approach 3) Use incremental action by working with individuals in a way that slowly increases engagement over time.

Phillips ended the session by reminding the group that success in effecting the change we seek is not simply through elections. Issue-oriented campaigns that propose viable solutions have the power to make a significant difference regardless of who is in office. While anyone can simply point out what’s wrong, if you have the knowledge and initiative to propose a solution and the leadership and wisdom to adapt your message as you hear from the public, you have the potential to be a real change-maker, he said.