Want to be a citizen journalist? You might be one already.
By Young African Leaders Initiative
5 MINUTE READ

If you use social media to tell what’s going on in your community or to shed light on current events around you, you’re doing the work of a citizen journalist.

A citizen journalist is “somebody doing acts of journalism without being a trained journalist,” according to Mark Glaser, founder of MediaShift, a site that follows news trends in the digital age. Glaser says citizen journalists can include both those who intend to report what they observe to a wide audience and those who happen to be on the scene when news occurs and share information with social media.

Although the idea of nonprofessional journalists making their voices heard has existed for centuries, citizen journalism got its first big boost from the internet. 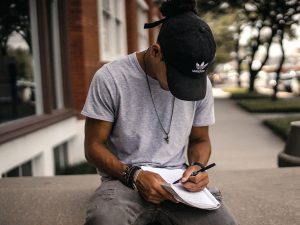 Valerie Belair-Gagnon, a media sociologist, says the effect of the internet on journalism was to replace the hierarchical structure of traditional news organizations with something much less centralized.

Under this model, groups such as Global Press Institute have trained women in areas around the globe that are under-represented in world media to tell stories important to their communities in places such as the Democratic Republic of the Congo. In the Niger Delta region of Nigeria, the International Center for Journalists trained citizen journalists to write about issues concerning health, the environment and local infrastructure.

But another tidal shift in citizen journalism came with the rise of social media, according to Glaser. “With smartphones,” he said, “a lot of people have the means to capture what’s going on around them very easily and post it to Twitter, Facebook, Instagram, etc. It’s created an amazing number of potential citizen journalists.”

This social media-boosted citizen journalism changed the way the world understood important events such as the 2007 Saffron Revolution in Myanmar, the Haiti earthquake and the Arab Spring.

“The advantage of citizen journalists is that they’re everywhere,” said Glaser. “Say there’s an explosion and people want to know what happened. The television news team or the newspaper reporter is going to have to get there, while there are probably people at the scene who have the tools to capture it right in their pockets.” Glaser said the work of citizen journalists can also offer perspectives missed in mainstream media.

The disadvantages? “I think there’s always going to be a question around credibility when you’re getting material from citizen journalists,” Glaser said. A bystander with a cellphone might not know what to capture or what questions to ask in the the way a trained journalist would. “What usually works best, when it comes to material from citizen journalists, is when it’s picked up by a professional news organization that can than verify it and give it context.”

During the Arab Spring protests, established news organizations made extensive use of reports from people in the streets on Twitter and WhatsApp, both protesters and bystanders. “In these cases,” said Belair-Gagnon, “citizen media helped news organizations source stories and helped movements to take ownership of their stories.”

While there are still numerous sites devoted to citizen journalism, both experts agree that social media have become the main vehicle for citizen journalists. “You don’t need to have an institutional voice to be able to share information and stories,” said Belair-Gagnon.