The Young African Leaders Initiative (YALI) held a town hall meeting on August 27 in which  participants engaged in a lively discussion about the recent civil rights movements in the United States and across the world. Held over an online meeting platform, this event provided a unique means for various experts around the globe to come together and discuss the growing civil rights movement in America and its reverberations in other countries.

The conversation began with introductions of all panelists, who included YALI Mandela Washington Fellows, State Department representatives and a renowned Howard University professor who is an expert in both African-American and pan-African history.

After introductions, the panelists shared their opinions and experiences about the growing civil rights movements in the United States and around the world. The main topic of discussion was the question, “How has the killing of George Floyd impacted America?”

Professor Greg Carr of Howard University said that the death of George Floyd represents a tipping point in a series of murders, sparking an international multiracial and generational strike against the existing social order. The Black Lives Matter (BLM) movement has spread around the world, including throughout sub-Saharan Africa. Protests have taken place in Kenya, Ghana and South Africa, and the African Union released a statement in late May showing their support for the movement in America. Additionally, the Floyd family testified in front of the United Nations Human Rights Council, which led to the council launching an inquiry into the egregious human rights violations. Floyd’s killing launched a global movement toward equality and racial justice throughout both the U.S. and the rest of the world. It will continue to have a powerful domino effect for the BLM movement.

Carr further noted that there is increasing solidarity apparent for the BLM movement due to global improvements in technology, movement, communication and information dissemination. However, despite these advances in interracial support, there will always be underlying tensions in the U.S. due to what Carr sees as the inherently exclusionary nature of American nationalism. He believes that the way to remedy these tensions is for society to see the common levels of culture that connect us to one another, and to acknowledge the various civil rights movements to advance racial equality. 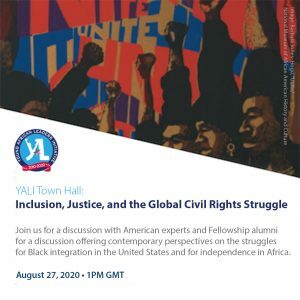 Elizabeth Musoki, a 2017 Mandela Washington Fellow from Uganda, elaborated on Carr’s sentiments. She underlined how the protests around the world have been effective at capturing global attention, which has increased overall interest and support for the movement. She emphasized the importance of the African Union’s condemnation of discriminatory practices against Blacks in the U.S., as it represents a global effort to provide racial equality. At a local level, Musoki has noticed how there have been calls for the local police in Uganda to change various policies and to learn from the United States’ experience. Musoki firmly believes that these protests in the wake of Floyd’s killing will influence all corners of the world and will invoke change.

Global rights activist and journalist Matthew Fred has a passion for peacebuilding and conflict resolution. He shared his experiences of mentoring rural communities in Africa. As a 2014 Mandela Washington Fellow from Liberia, Fred used his experience with YALI to raise awareness of and challenge ethnic discrimination, human rights violations and conflict-related problems. He believes that these societal issues are ultimately preventing Africa’s further economic growth, and he endeavors to remedy this on an international scale. Much like Musoki, Fred has noticed that there have been shifts in traditional thinking in Africa as a response to the killing of George Floyd in the United States. Directly relating to his passion for conflict resolution and the protection of human rights, Fred feels passionately about the BLM movement in the United States in the wake of Floyd’s brutal killing.

Deputy Assistant Secretary of State for African Affairs Elizabeth Fitzsimmons spoke about the need for these difficult conversations in order to create change. The idea for the town hall event came directly out of George Floyd’s killing and the inherent societal issues that she has noticed throughout her time with the State Department. The increasing support for the BLM movement, as seen through the National Basketball Association and other similar organizations, seeks to normalize and promote the message of racial equality and civil rights, challenging traditional schools of thought. In an effort to solve these discriminatory, systemic problems, Fitzsimmons wishes to increase the amount of open and difficult conversations regarding race and equality in order to dismantle a social structure fundamentally built on oppression.

Through global communication and an open national conversation, the Black Lives Matter movement will continue to gain support in the coming months, participants believe. Despite the history of American oppression and systemic racism, the new generations of interracial Americans can come together in a unified fashion to demand justice in this crucial modern-day civil rights movement.

You can watch the full YALI Town Hall here to learn more about the discussion.

The views and opinions expressed here belong to the author, interviewee, or panelists and do not necessarily reflect those of the Network or the U.S. government.